Baby Led Weaning: Should You Skip The Mush? (And Why You'd Want To)

More and more parents are skipping the purees and starting their babies on finger foods. They’re doing away with the spoon feeding, the food processor, the jarred baby food, and the weird pureed fruit and veg combos. Instead, they’re practising baby led weaning, a new approach to starting solids that has infants feeding themselves at the dinner table alongside the family. While plenty of parents and medical professionals have praised baby led weaning for its many benefits (more on this below), attempting it can be a little scary, especially for first time parents. If you’re considering going the baby led weaning route, here are some things you need to know before you start.

What is baby led weaning?

In a nutshell, baby led weaning (BLW) is a way of feeding solids that hands the control over to the baby. The baby sits with the family during mealtimes and feeds herself finger foods instead of being spoon fed the traditional rice cereal or vegetable puree.

The term 'baby led weaning' was made popular by Gill Rapley, a British midwife, nurse, and breastfeeding consultant. 'Weaning,' in this context, doesn’t mean that you stop breastfeeding or giving your baby formula when you introduce solids. In fact, Rapley says that solid foods shouldn’t be pushed 'at the expense of breastmilk' (or formula) and that children 'will phase out breastfeeding when they're ready.'

Babies are usually able to begin to self feed at 6 months old, although some will wait until 7 or 8 months. When baby shows signs that he’s ready for solids, you offer a range of finger foods of varying textures and tastes.

Babies will often start by licking or sucking on pieces of food before they learn to actually gnaw, chew, swallow, and eat. Initially, babies eat very little food. This may cause frustration on the part of the parent, but it’s all just part of the BLW approach. Eventually, baby will actually eat and digest what’s offered. In between meals, keep giving breastmilk or formula. As your baby eats more solid foods, he’ll naturally start drinking less milk.

One big advantage of BLW is that you’re just giving baby what everyone else is having. Great first foods include avocados, bananas, and cooked vegetables like sweet potatoes and carrots.  If you’re having spaghetti, let him have some of that. If you’re preparing a salad, set aside some chopped up cucumber for the littlest one. There’s no need for pureeing or mashing or straining.

According to Rapley and other BLW experts, there are lots of benefits from following this approach. These include:

Look for signs that baby is ready for solids. You’ll know that he’s ready when he’s 6 months or older, shows interest in your food, starts grabbing food off other people’s plates, and shows a general understanding of what food is and what to do with it.

Offer solids when the rest of the family are also eating. This allows baby to mimic the adults’ behaviour and the adults to set an example.

Read up. It’s always best to do your research before attempting any child rearing practice you’re not completely familiar with. Rapley offers a step by step guide and answers to FAQs on her website.

Be vigilant. Observe your baby while she’s eating and make sure she’s in the correct sitting position.

Stay calm. Don’t freak out when baby gags. If you do, you’ll just end up scaring him as well. Do your best to stay (or at least appear) calm and let your baby enjoy his meal.

Anticipate a mess. Especially at the beginning, most of the food you place on baby’s tray or plate will end up on the floor, the walls, her highchair, or her hair. Prepare for this by stocking up on silicone bibs and laying a tarp on the floor to catch spills.

Don’t expect too much. Keep in mind that while some mums and their babies may welcome BLW, it may not work well for you and your child.

Don’t give up. It may take up to 20 exposures to the same type of food before a child learns to like it. If your baby rejects a food, keep reintroducing it until he accepts.

Don’t stress. Don’t force or hurry or scold or get emotional. Just have fun with it!

*Important: Please consult your child’s doctor before attempting baby led weaning, especially if you have a family history of digestive problems or food allergies, your baby was born prematurely, or your baby has special needs. 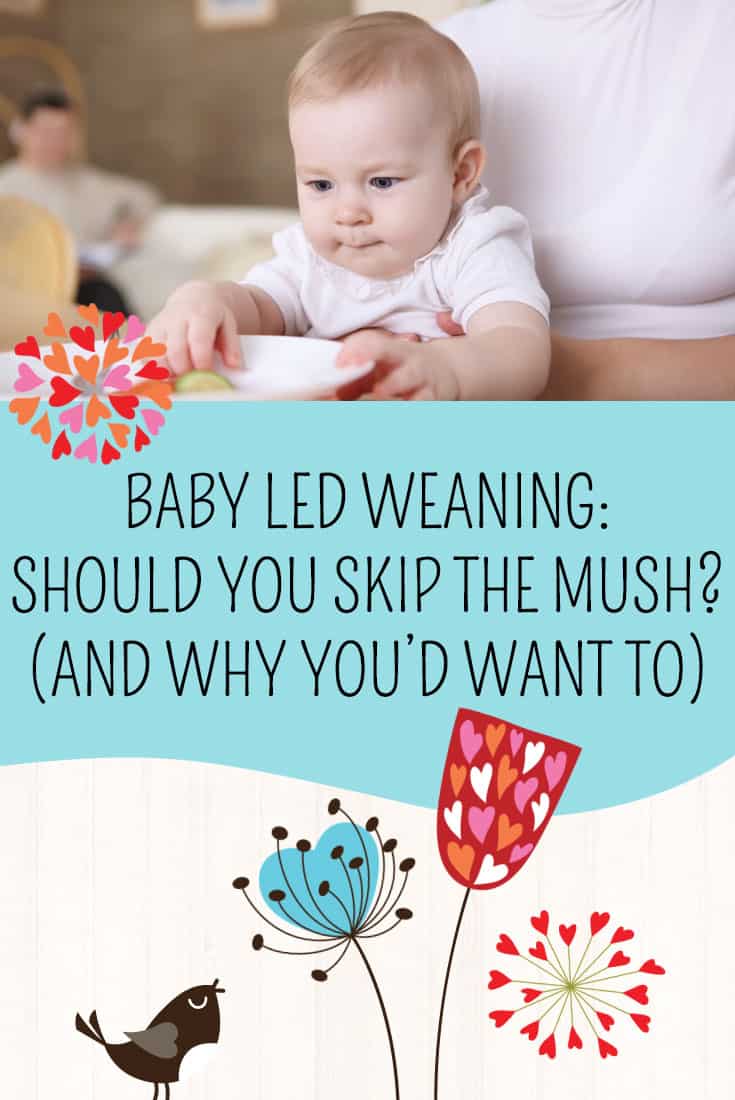