ANZAC Biscuits - a brief history and an original recipe 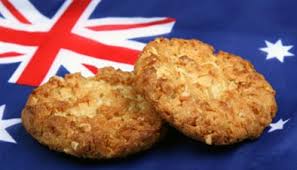 ANZAC Biscuits have a long association with Australian and New Zealand Army Corps  - dating back to the first World War.

The army biscuit known as ANZAC biscuits are kind of like the old ship's hard tack. They have a long shelf life, and were often eaten as a substitute for bread. Unlike bread, though, the biscuits are very, very hard, and some soldiers preferred to grind them up and eat them as porridge.

It is claimed that these biscuits originated when they were made and sent to soilders abroad by their loving wives and mothers - they contained ingredients that did not spoil easily and they kept well during naval transportation.

The ANZAC biscuit that is still popular today is somewhat different. You can make them crunchy, or soft and chewy. They're great for dunking in your tea!

I found this recipe on the Australian War Memorial Web Site and it is a original recipe provided by an ANZAC who was present at the Gallipoli landing.

3. Melt together butter and golden syrup. Combine water and bicarbonate soda, and add to butter mixture.

5. Drop teaspoons of mixture onto tray, allowing room for spreading.

6. Bake for 10 to 15 minutes or until golden. Allow to cool on tray for a few minutes before transferring to cooling racks.